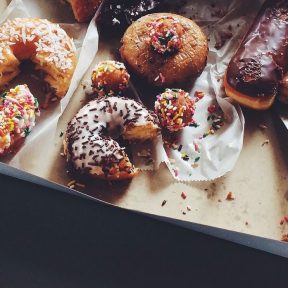 In his book “The 4-Hour Body”, one of the many things Tim Ferriss talks about is the Slow Carb Diet. Go here for details, but for now I want to focus on one of the key components – Cheat Day. The basic idea is that you follow the eating programme strictly for six days of the week, then on the seventh day, you can eat whatever the hell you like. Breakfast for me on Cheat Day is often two or three custard doughnuts, and it generally gets worse from there.

The important thing is that it is called ‘Cheat Day’. Not ‘Treat Day’ or ‘Go Nuts! Day’ or anything positive or encouraging. The effect this has on your mindset is quite profound – I’ll enjoy those breakfast doughnuts, but as I’m eating them, I understand that I’m cheating on the diet. It’s not a ‘reward’ for doing well – I’m breaking the rules. ‘Treat’ Day sounds like something to look forward to, but nobody likes to think of themself as a cheat.

Ferriss uses the same idea with his recipe for a Fat Shake. It’s 1000+ calories that is great after exercise – but it’s not called a ‘Recovery Shake’. It’s delicious, but calling it a Fat Shake helps me limit how often I drink one. The same principle applies for the days when we don’t exercise. Having a ‘Rest Day’ once a week sounds like we’re being lazy; framing it as a ‘Recovery Day’ puts a whole different spin on it.

It’s not just in health that our language is a consideration. The world of finance uses words quite carefully – and often in a slightly misleading way. I wonder how much more reluctant people would be to use a Debt Card, rather than a Credit Card. The word ‘credit’ generally has a positive feel to it – when we are given credit for something we’ve done, we are being complimented – it makes us feel better. A credit card sounds like a good thing … a ‘debt card’ – for that is what they are – not so much. The same idea applies to loans – it sounds like someone is doing you a favour. When someone loans you their lawnmower, you just sort of give it back when you’re done, with no other obligations. But I suspect that taking out a ‘Pay Day Loan’ is a lot easier than applying for a ‘I spent too much too quickly this month debt’. It’s also interesting how quickly the finance industry changes it’s language when we start getting behind. Miss payments, and you’ll hear from the Debt Collector, not the ‘Repayment Requestor’.

Perhaps the most important place to think about how we use language is in our own heads. We all have that inner critic – and that can be a positive thing. It’s right that we assess our decisions and actions to see whether we could – should? – have done things differently. But the language of most people’s inner critic tends to be very negative – we judge ourselves incredibly harshly, using words that we would never say to anyone else. Changing this isn’t easy, but it can be done. It starts with catching ourselves when the inner critic is being unreasonably hard on us, gradually being nicer to ourselves, and remembering to give ourselves credit for our successes as well as analysing our mistakes.

For a long time I was very sceptical about the power of language, but as philosopher Ludwig Wittgenstein said, “The limits of my language means the limits of my world.”

Is there anywhere your language might be limiting your world?

PreviousFinding Your Truth
NextSilence is Dangerous