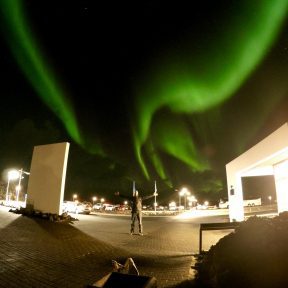 Two years ago, I spent a brilliant couple of days in Iceland. A friend of mine is heading out there soon, and asked me about what I’d done, and where I’d been … it occurred to me that a quick guide to Iceland might be useful to a few other people out there as well, so – assuming you’re flying in to Keflavik, and staying in Reykjavik – here’s what I’d suggest …

» Hire a car so you can take in the stunning scenery at your own pace – but don’t break the speed limit! They are very strict, and if you’re caught on camera, it automatically gets charged to your hire car company. If the Police catch you, it’s an on-the-spot fine. Speed limits are lower than in most countries, and fines are higher! (That’s the bad stuff out of the way!)

» Driving generally was easier than I expected – you won’t need a 4×4 unless you’re going in winter, or planning to get off the main roads.

» Pre-book the unmissable Blue Lagoon for straight after you land – it’s between Keflavik Airport and Reykjavik, and is a brilliant way to de-stress after your flight. One of the more expensive things to do, but worth every penny.

» Reykjavik itself is pretty small, and you can easily get a feel for it with a couple of hours walking around – I’d say that Iceland has much more interesting things to see than its capital city!

» Make an early start, don’t dally too much, and in one day you can take in the amazing waterfalls at Seljalandsfoss [don’t miss the little scramble up to nearby Gljúfrafoss], and Skógafoss, then the glacier at Sólheimajökull, and finally the black sand beaches at Vik. It makes for a busy – but unforgettable – day.

» You can also do the Golden Circle in a day, which will cover Þingvellir (Thingvellir) National Park, the Geysir geothermal area, and Gullfoss waterfall – there are loads of little extras you can add. More info here.

» If you’re lucky enough to see the Northern Lights, be aware that sometimes the show only lasts a few minutes – so if they start, stop whatever you’re doing, and take in a truly extraordinary sight.

» Iceland has a reputation for being expensive – and that’s true for things like food and drink, but all the waterfalls, geysers and parks are free (there’s a nominal fee for Kerid Crater on the Golden Circle) which balances things out. Overall, it wasn’t any more expensive than a typical European city break.

» The weather is very changeable (“if you don’t like the weather, wait five minutes” say the locals), so layer up, and take full wets! Stick your swimmers in the car, as you never know when you might stumble across hot springs…

My favourite thing about Iceland? The people. With only 340,000 of them in a country almost the size of the UK, there’s a real sense of calm and space that reminded me of Canada. It’s hard to imagine an Icelander getting stressed – and that has to be a good thing.

I loved Iceland – get yourself there if you can!

PS I’m not sure what the thing is with me having my arms spread out wide in these pictures … maybe something subliminal about the sense of space?!

Let’s Go Do It …
For flights, I find it’s hard to go wrong with Skyscanner. (They are also pretty good for car hire, too).
While I didn’t use Airbnb on my trip, I’m a huge fan. If you haven’t tried it, I reckon Iceland would be a really good place to start!

PreviousPush-Up Challenge … 1 Year On
NextWhat happened on your birthday?