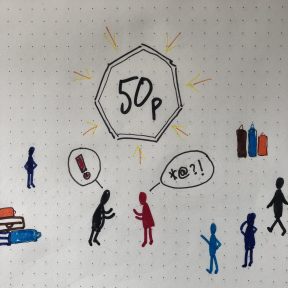 Late ’95, I moved to London for the second time and got a job as a luggage porter at a swanky hotel near Marble Arch. I’d worked in a hotel before, loved it, and thought this would be the same …

Tips were everything, and £100 a shift wasn’t particularly unusual. In theory, there was a complicated ‘honour’ system in place that dictated how tips were divided – but everyone knew it was a sham. There was no integrity. It was every man for himself.

[And it was all men. Although a girl joined at the same time as me – the only female porter – she was hounded out within a fortnight. But that’s a story for another day].

Arguments were common. One day, I returned to the Luggage Room after delivering some cases to find two guys raging at each other. There was some pushing and shoving, then a couple of fists flew before they were separated.

The incident went up to HR, and I was called in as a witness. Even though I knew what happened I kept my mouth shut.

Firstly, they weren’t actually fighting over 50p. The money was only a symptom of an underlying animosity between them. Everyone knew it would boil over eventually – but no-one did anything about it.

Problems don’t solve themselves.
[But the earlier we face them, the easier the solution].

Secondly, the culture in the luggage room was poisonous – but incredibly strong. When it was ‘us’ against the HR people, I sided with the porters – ‘my team’ – even though I knew what had happened was wrong.

Culture develops whether we like it or not.
[But we do get to choose what form it takes].

PreviousOverpromising and Underdelivering
NextThe Best Boss I Ever Had