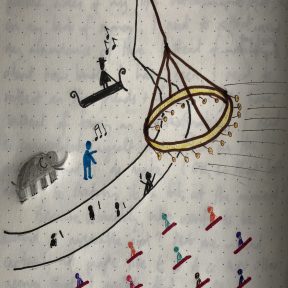 Sometimes, It’s Just Not Our Day

For a time, I was Stage Door Keeper at Her Majesty’s Theatre on the Haymarket in London. [Where you could still go and watch ‘Phantom of the Opera’ tonight if you wanted!]

It’s one of those jobs where you get to know everyone, and hear everything …

I was there during a cast change. Contracts were usually 12 months, so every year a couple of the roles would go to new people. Auditions had been going on for several weeks, and most of the decisions had been made. However one part was still up for grabs – that of Monsieur Firmin. Not a lead role, but an important character in the show, and a very desirable job – the sort that could really cement an actor’s reputation.

After yet another recall, the Director, Choreographer and Musical Director gathered by the stage door to discuss the relative merits of the final two candidates. They ignored me, quietly drinking my tea in the corner.

“I prefer this guy’s voice” … “Although the other guy is a better actor” … “Yeah, but why did he leave ‘Les Mis’ after only six months?” … “The first guy hasn’t worked in the West End at all though” … and so on …

Then one of the wardrobe assistants walked in.

Half-jokingly, the Director asked for her opinion. She looked down at the CVs and photos on the table, then pointed at one of them.

“That guy is really tall. If he gets it, we’ll have to make a new costume.” She smiled, shrugged, then left.

The three decision-makers looked at each other for a moment.

The shorter guy got the role. [And had to wear an old costume].

Firstly, sometimes it helps to get advice from an unusual place. A different perspective is useful – especially when we’re stuck.

And secondly – despite our best efforts, sometimes it’s just not our day. Situations – other people’s decisions – are often outside our control.

But we are always in control of our response.

PreviousWhen It’s On You – Say So
NextDrumming Stories